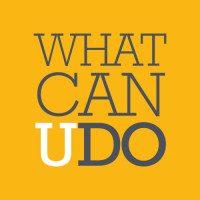 TOD will be the most urban, walkable, transit oriented zoning district in the new Unified Development Ordinance (UDO). The four proposed districts represent a range of intensities and standards that are appropriate within walking distance of a transit station.  The new TOD districts will be applicable to not only the Blue Line Light Rail, but also the Gold Line and future transit corridors.

TOD includes a higher level of design standards plus greater allowed height by-right achieved through a bonus system. It does not include standards for transitioning to residential neighborhoods, since the TOD district will not be used next to such neighborhoods. These transition standards will be included in other less intense TOD districts to be rolled out this spring.

You can acces a 2-page Background Info document immediately below, as well as individual section documents (i.e. Design Standards) under their question/comment sections below.

City of Charlotte, NC Survey
Please leave your name and e-mail for this survey. Use the submit button before filling out the remainder of the survey to associate comments with your email address.

The TOD districts will create higher intensity, compact, and mixed use development around existing and future transit stations and corridors as identified in the City's adopted future land use. The development standards are designed to promote a walkable urban form, access to transit, and a well-integrated mix of uses.

Please share any comments/questions you have about the TOD districts that are not section specific. Thanks!
Closed for Comments

Please list comments in the section below as listed by page.

The purpose of the Transit Oriented Development Districts is to encourage the location of uses and forms of development conducive to and accommodating of increased transit usage. The TOD District is intended to promote well-integrated, mixed-use development around transit stations, ensuring that development occurs in the form of compatible, high intensity, transit-friendly design in close proximity to transit stations. The regulations encourage a highly walkable neighborhood, decreased reliance on motor vehicles, and mixed-use development that provides settings for social interaction and active community life. 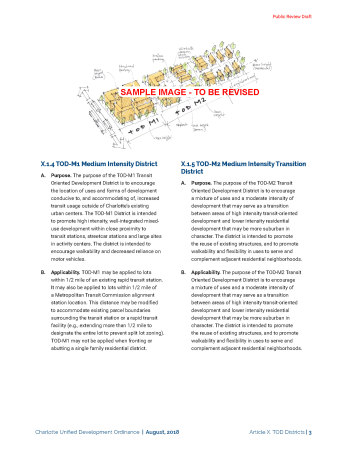 The TOD Districts have dimensional standards that are more form-based than would be found in other districts. The standards are organized into a table, as opposed to the current listed structure. Also included is a BIG IDEA of height bonuses for priorities including affordable housing, transportation improvements, as well as numerous others. 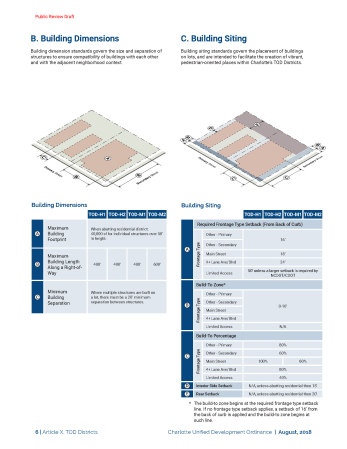 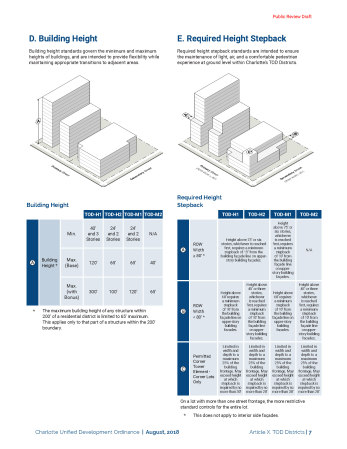 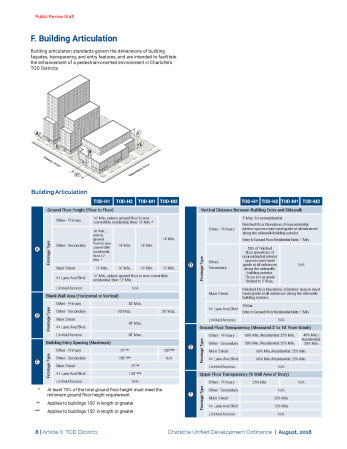 City of Charlotte, NC Survey
Building Height Bonus - Affordable Housing + Transportation + Open Space: The bonus structure is currently being finalized. Please share any questions/comments you have on the general categories. Suggestions for additional bonuses are welcome.
Closed for Comments

The Public Realm Standards include applicability of streetscape and the standards types, as well as pedestrian connectivity.

Off Street Vehicle and Bicycle Parking, and Off-Street Loading

The general parking standards for vehicles and bicycles are included in the released TOD draft.

City of Charlotte, NC Survey
Landscape/Screening: Please share any comments/questions that you have.
Closed for Comments

The new use structure is a clear delineation of what uses are permitted in the TOD-A Zoning District. Included in the Use Section is the following:

The following questions focus on land uses within the Use Matrix.  If you have multiple comments, please group them together in the comment box.

The following question focuses on land uses allowed within TOD-A.  If you have multiple comments, please group them together in the comment box.

The following question focuses on temporary uses within TOD-A. The section includes a new Temporary Use Process.

City of Charlotte, NC Survey
Temporary Use Standards: Please share any questions/comments you have.
Closed for Comments

City of Charlotte, NC Survey
Accessory Uses: Please share any comments/questions you have.
Closed for Comments

The following question focuses on Definitions.  If you have multiple comments, please group them together in the comment box.

City of Charlotte, NC Survey
Definitions: Please share any questions/comments you have.
Closed for Comments

The following question focuses on Non-Conformities.  If you have multiple comments, please group them together in the comment box.

City of Charlotte, NC Survey
Non-Conformities: Please share any questions/comments you have.
Closed for Comments

The following question focuses on Definitions as they relate to terms in the document.  If you have multiple comments, please group them together in the comment box.

City of Charlotte, NC Survey
Definitions: Please share any questions/comments you have.
Closed for Comments
This is hidden text that lets us know when google translate runs.