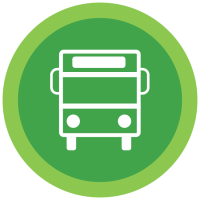 In 2016, Wake County residents chose a future with greater freedom and choice of mobility than ever before. The decision to adopt and fund the Wake County Transit Plan represented the biggest investment in transit in the city’s history.

This choice will create, among other improvements, 20 miles of bus rapid transit service. It’s similar to light rail, where buses have their own lanes and where stations with raised platforms and pre-boarding fare payment mean riders simply step on the bus and go – like a metro station, not a bus stop.

BRT has the ability to increase access to job opportunities, encourage walkability and healthier lifestyles, and reduce carbon emissions. Maximizing the benefit of BRT also means thinking about the areas near stations – and how Raleigh grows.

Historically, Raleigh has grown mainly around driving. For the last several decades, most new housing has been built at the fringes of the city. Over time, commutes grew ever longer. That has meant increased interest in living in walkable, high-opportunity areas. BRT offers the opportunity to think about growing more around transit and walking than in places where driving is the only option.

This survey presents two packages of recommendations designed to address primary goals of the Equitable Development Around Transit study, as defined through public input. We would appreciate your feedback as to how well these recommendations help us achieve these goals. The survey takes about five minutes to complete.

What we’ve heard: Public input in this process has strongly supported the idea that Raleigh should grow much more around transit and walking than it has in the past. In surveys and workshops, participants overwhelmingly selected the most “grow around transit” option. They indicated that it is very important to reduce carbon emissions by allowing more people to live in work in walkable places near transit.

In response to what we’ve heard, the EDAT plan recommends:

What we’ve heard: The other key goal of this project is contained in the word “Equitable.” That means ensuring that residents of all income levels share in the benefits of the investment in transit and avoiding displacement in neighborhoods along the BRT routes. Public input in this process made it clear that equity considerations are critical, with participants strongly indicating that ensuring housing affordability near BRT stations is important.

In response to this choice, the EDAT plan recommends:

City of Raleigh, NC Survey
The questions marked with a red border are required.