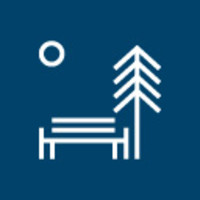 The City of Raleigh Parks, Recreation and Cultural Resources Department invites you to share your thoughts and ideas during the Fisher Street Park planning process.  As part of the overall East College Park development and in cooperation with the City of Raleigh Housing and Neighborhood Department, the existing Fisher Street Park, located at 328 North Fisher Street, is planned to be relocated to a new parcel at the corner of North Fisher and Pender Streets, approximately one block to the south. 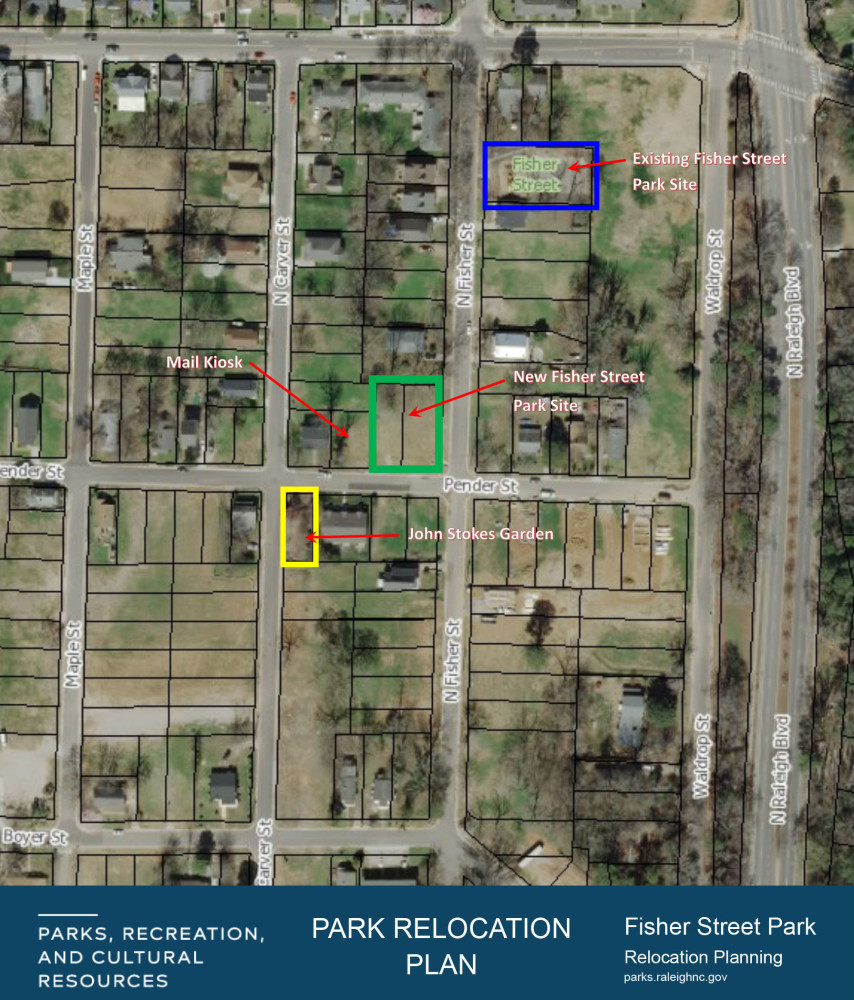 The future site of Fisher Street Park is 0.26 acres in size and located at the corner of Fisher and Pender Streets, approximately 400 feet to the south of its current location.  Formerly a residential lot with a single-family home, the site is a cleared, grassy lot and adjacent to the recently constructed East College Park neighborhood mailbox kiosk.  A drainage easement runs along the northern side of the parcel.  A sidewalk was constructed in late 2019 along the southern end of parcel, connecting the mail kiosk to the street corner of Fisher and Pender Streets. It is anticipated there will eventually be a sidewalk constructed along the eastern side of the property.

At approximately one quarter-acre in size, the future site is nearly identical in size to the current location.  The existing park site is planned to be re-developed into new housing.

Two design concepts have been developed and we want your input!

The Raleigh Parks, Recreation and Cultural Resources Department is committed to programming the new park location to match the uses of the existing Fisher Street Park.  Based on our previous involvement with the East College Park and the North Central Community Advisory Council, a new basketball court and playground are key needs.

The relocation of this park provides an opportunity to update and enhance these amenities.   In addition to the development of a new playground and basketball court, this project will focus on improving the overall quality, aesthetics, and accessibility of this shared space.

Your thoughts regarding the plans for Fisher Street Park are very important to our effort to ensure that the long-range vision for the park meets the needs of the community.  The input received will be used in future public discussions and will help form the foundation for our design process.

As you will be review two different plan concepts, please be sure to fully review both plans before answering survey questions.  Thank you!

The new Fisher Street Park site is shown in green below.  The mail kiosk site, constructed in 2019, is to the west of the park site. 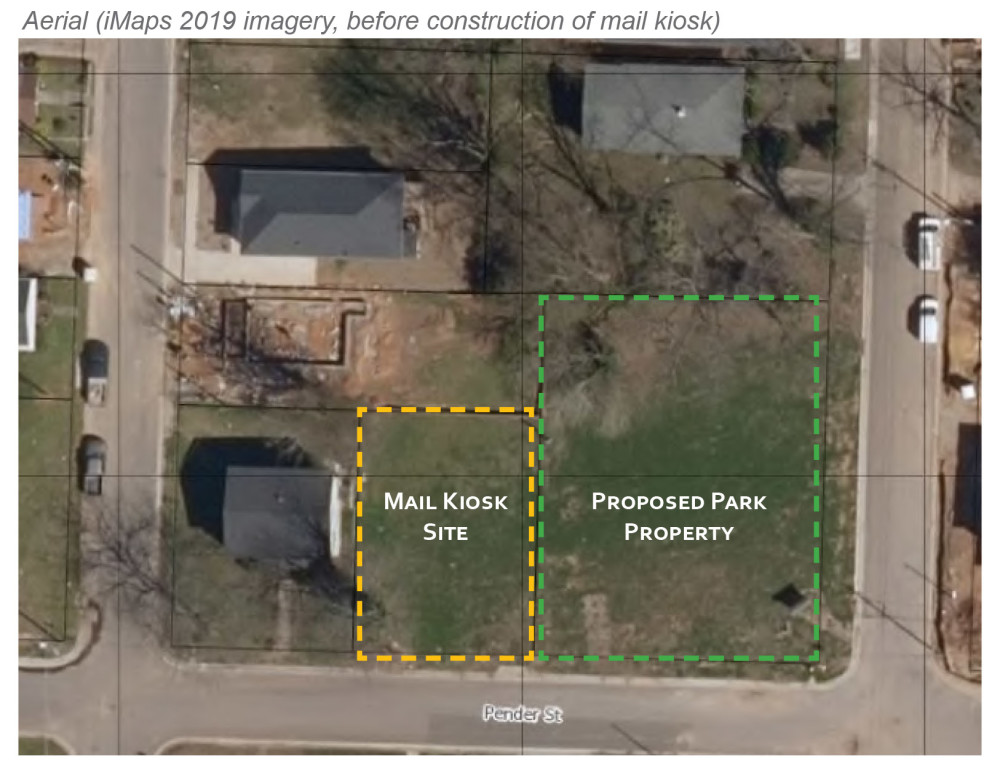 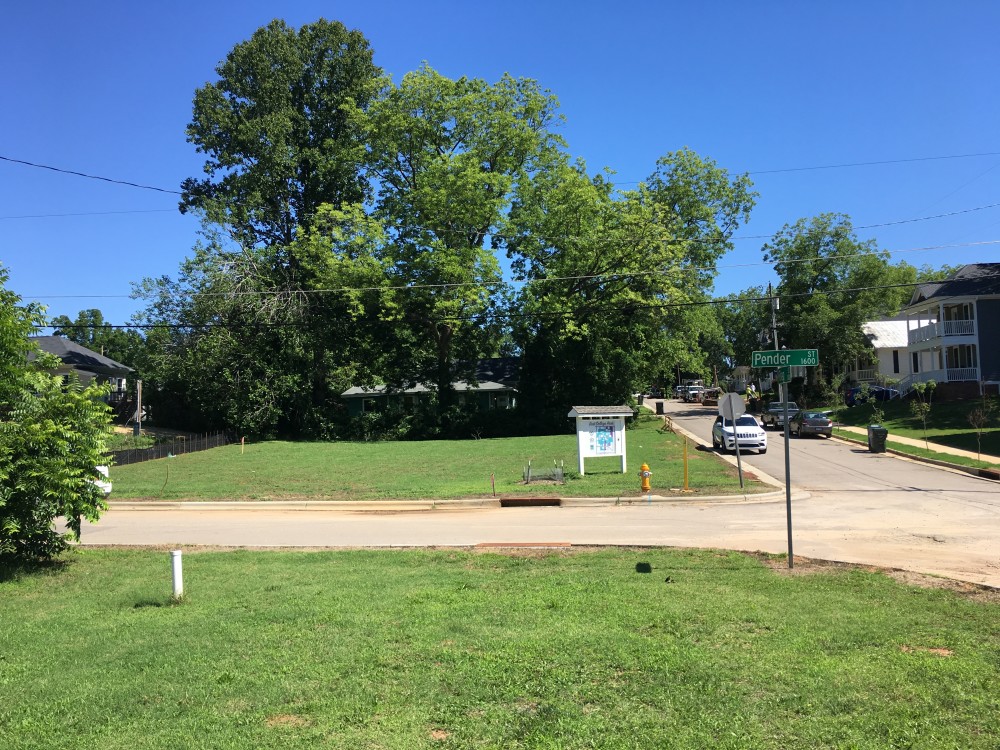 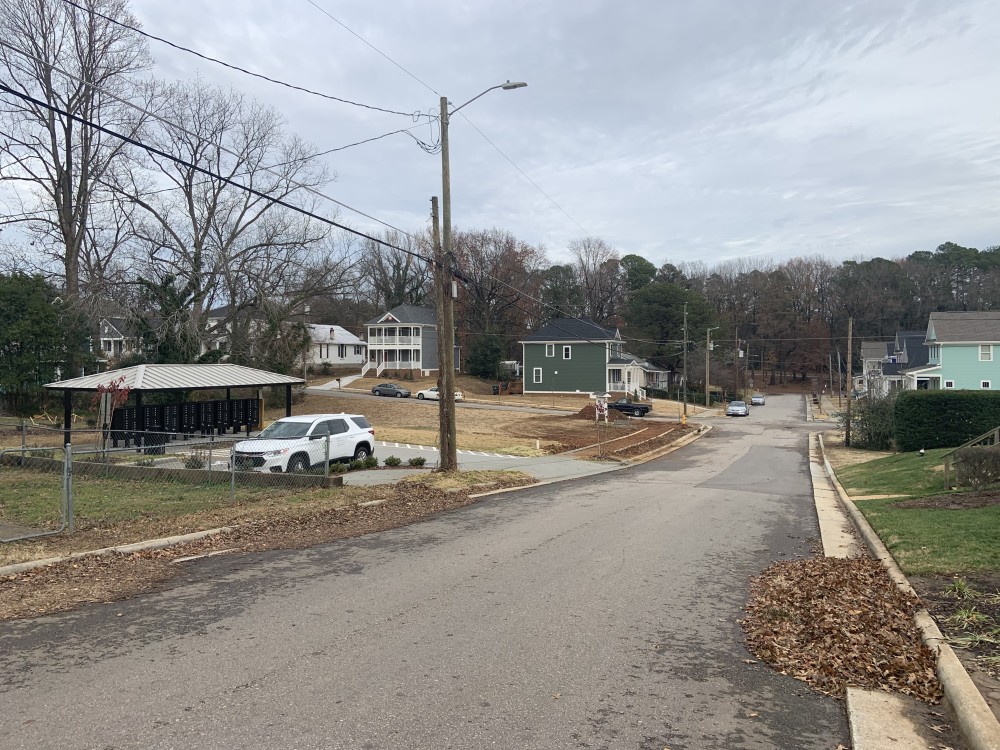 Please review both concept plans below.  The programming for the new park site will primarily be a basketball court and playground area.  The two concept plans express a difference in size and relationship between these two programming elements, coupled with new seating and landscaping.  There may be opportunities to include art or interpretive features illustrating the history of the East College Park neighborhood.

The various design components (playground equipment, shade structures, and art/interpretive displays) are shown as examples only.  During the design phase, there will be additional public input on the type, design, and final locations of these elements. 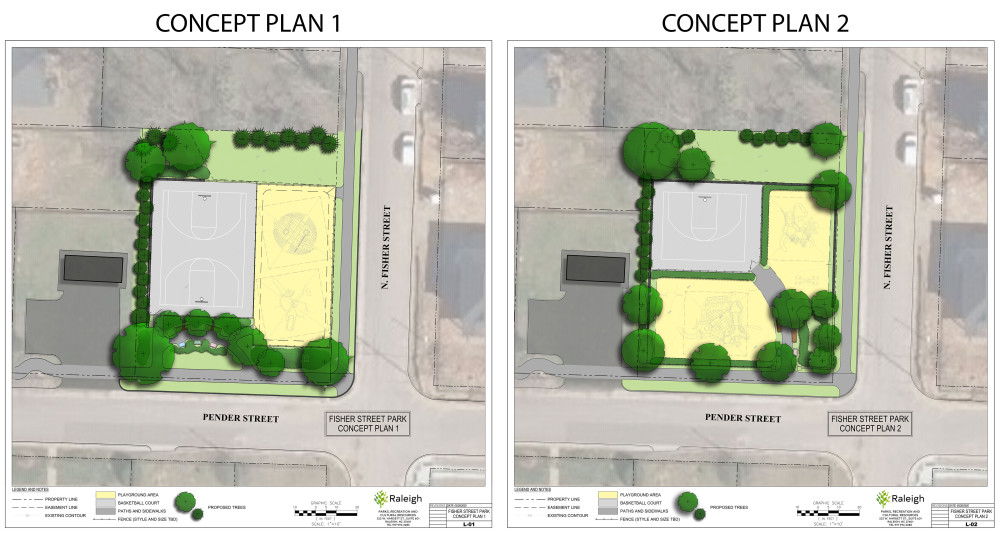 Survey questions are below each Concept Plan. 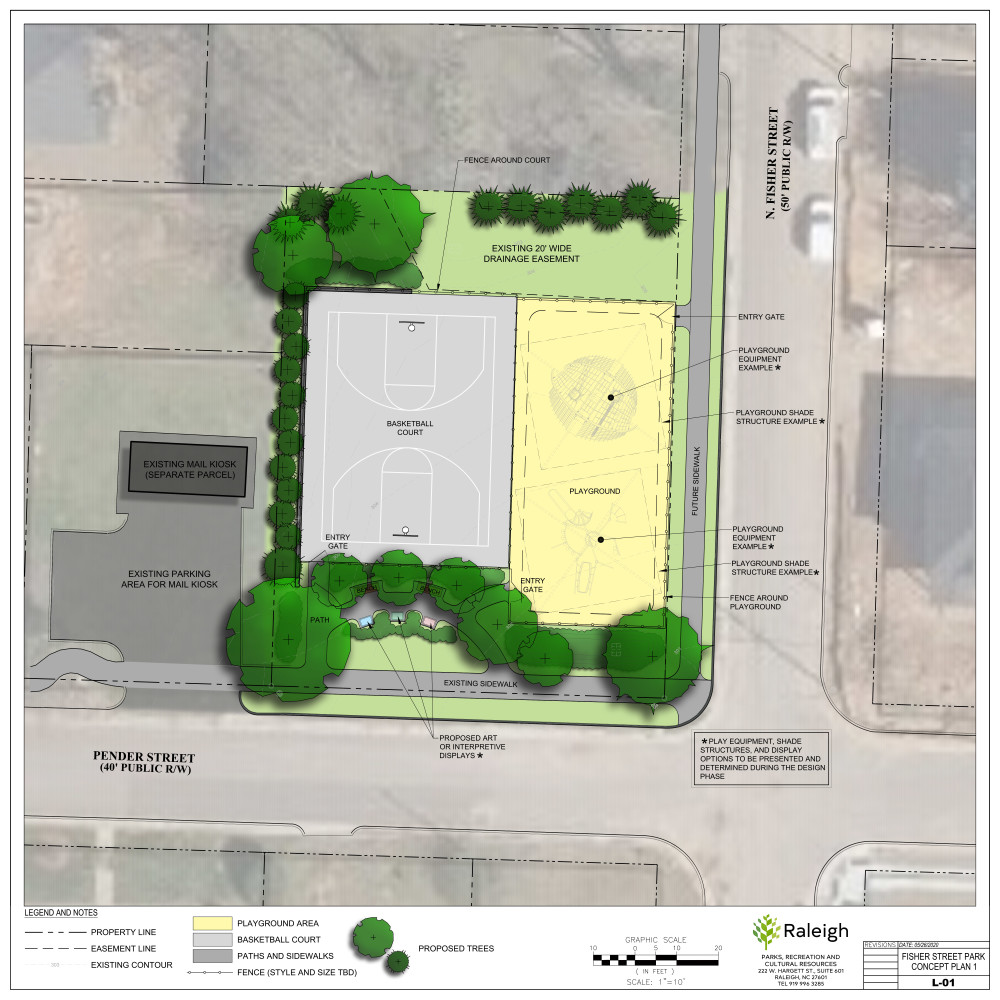 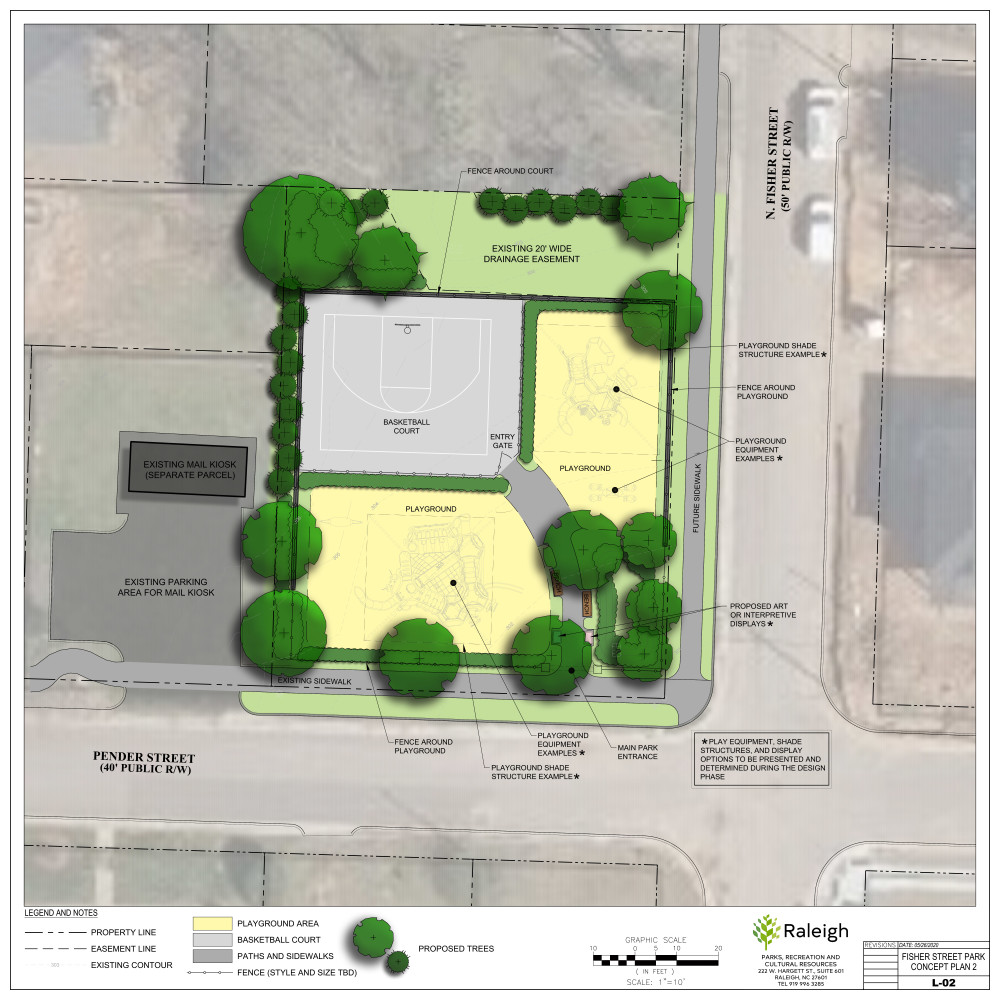 *See the options and image board below this question for ideas. As there are many possible types of playground experiences, feel free to leave additional comments and ideas for any play equipment/experiences not shown.*

Below are just some examples of the many options available for play equipment.  Please feel free to add your comments above for other types of preferred play equipment and experiences. 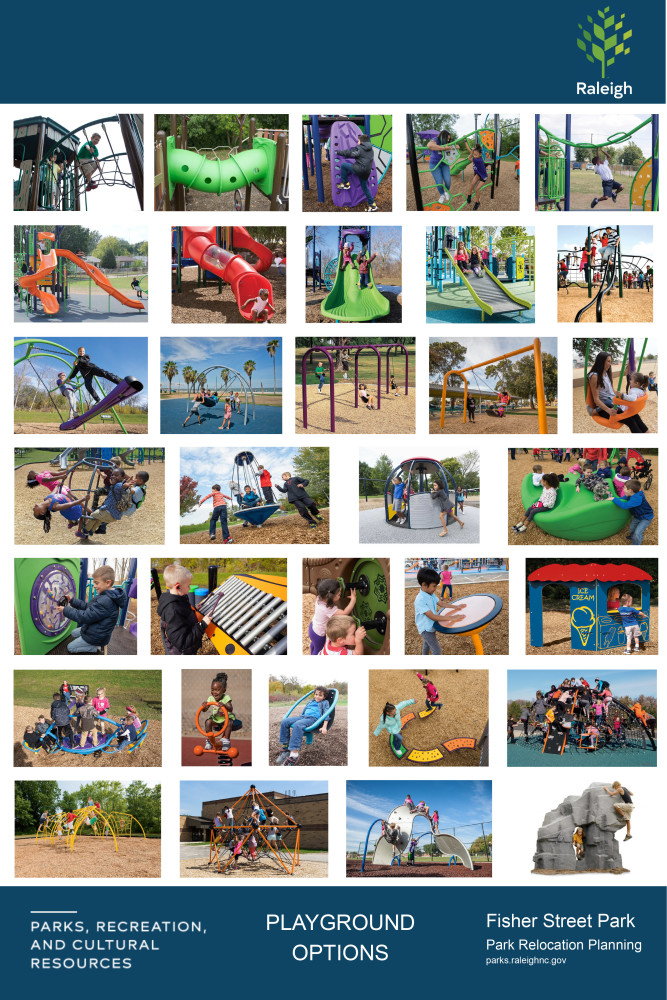 Enter your email to participate