Thank you for your interest in the Charlotte Unified Development Ordinance (UDO)!

The Charlotte UDO is a city-wide effort to update the regulations that guide growth and development in Charlotte. The UDO combines eight development ordinances, including the zoning ordinance, into one set of regulations to make them clearer and easier to use.

City Council adopted the UDO on August 22, 2022! The adopted UDO is available below.

Each draft of the UDO incorporated public input to ensure alignment with the community's vision. Staff gathered and considered feedback on the first draft UDO from the time of its initial release on October 7, 2021 until March 18, 2022. This comment period generated over 1,200 public comments and many more comments from elected and appointed officials as well as City and County staff. Many of these comments were incorporated into the second draft UDO, also known as the public hearing draft, which was released for public review and comment from June 3, 2022 through June 30, 2022.

In addition to public comments on the second draft, community members also had the opportunity to provide public comment before the City Council at the UDO Public Hearing on July 11, 2022. Staff has since responded to all comments and recommended changes for Planning Committee consideration, where appropriate.

City Council adopted the UDO on Monday, August, 22, 2022. The adopted UDO is available below. 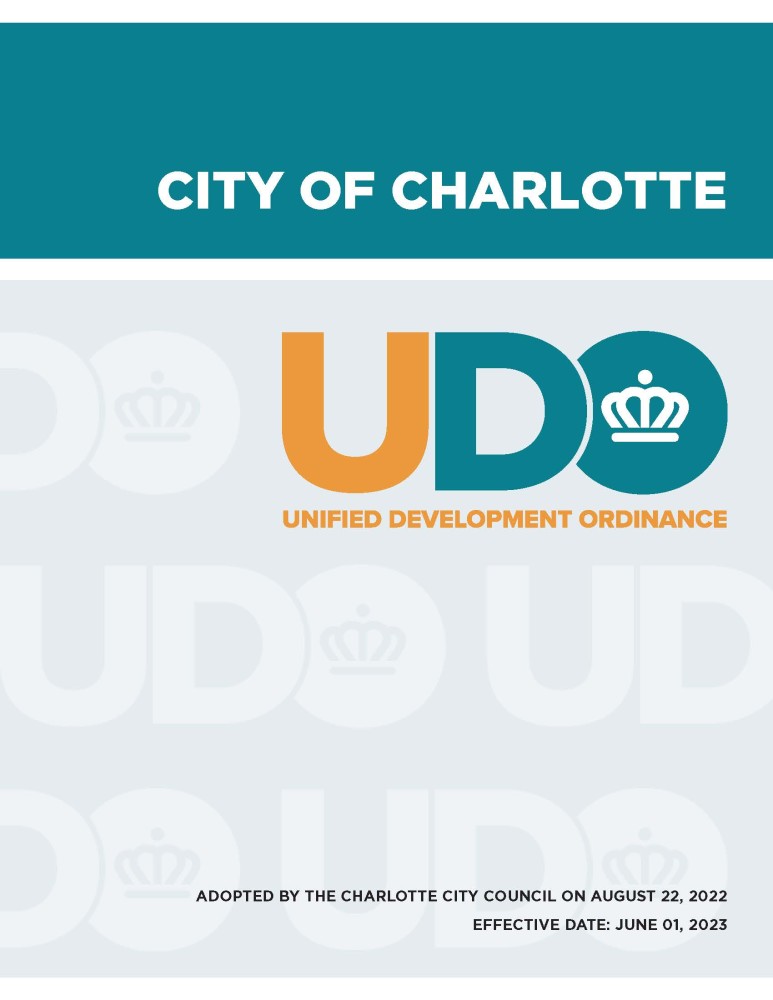 If you would like to download the full version of the adopted UDO we invite you to do so here.

DISCLAIMER: This is a large file.

Read the UDO by Article

The UDO has several accompanying documents and manuals to provide additional standards that support the UDO. View these documents by topic area here.

Stay up to date with the latest on the Charlotte UDO by signing up for project updates.

The public draft was developed by the City of Charlotte and Mecklenburg County staff, with feedback from its Ordinance Advisory Committee and consultant support from Camiros, Ltd.

Comments on the first draft of the UDO were accepted through March 18, 2022.

The second draft of the UDO was open for public comments through June 30, 2022.

The public hearing on the Public Hearing Draft of the UDO was held on July 11, 2022.

The adoption draft was considered and approved by City Council on August 22, 2022.