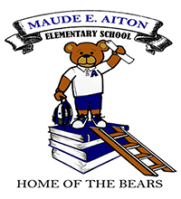 Maude E. Aiton was a kindergarten teacher in DC schools before becoming the Principal of the Americanization School in the District of Columbia from its opening in 1918 until her retirement in 1945. She also served as President of the DC Grade School Teachers Union and was President of the National Education Association (NEA) Department of Adult Education.

Lorraine H. Whitlock was a Ward 7 resident, a native Washingtonian and an alumnus of Paul Laurence Dunbar High School. In her career as an educator in the District of Columbia, she served as a teacher at Charles Young Elementary School, Leader of the Spingarn Instructional Unit, and Trustee at the University of the District of Columbia (UDC). She was also a longtime civic activist who was particularly involved in the Deanwood and Northeast Boundary neighborhoods of Ward7, where she resided for over 60 years. She served as President of the Deanwood Gardens Alliance, was a leader in the Far Northeast/Southeast Council, and was deeply involved in her local ANC. Mrs. Whitlock lived directly across the street from Aiton Elementary School during most of her adult life and was deeply involved with the Aiton community until her passing in 2003.

It should be noted that the desire to change the name of Maude E. Aiton Elementary School is not meant as any reflection on the legacy of Maude E. Aiton, but rather to honor Lorraine H. Whitlock’s contributions to the District of Columbia and Ward 7.

Please complete the brief form below, which is being administered in an effort to gather community sentiment on the potential name change.